Today, I’m hoping to cover some responses to posts released lately by writers at CPAPP, responses to my own post on Monopolies and Absolute Power in armies and some thoughts for consideration regarding CPAPP itself.

I’ll start with responses to the 3 part Hypocrisy in CPA series from Anonting.

Whilst there were many things I agreed and disagreed with diversely across the three posts, a major problem I had with parts 1 and 2 were that many claims were made, and no evidence was provided to back it up.

Take this segment from part 1: 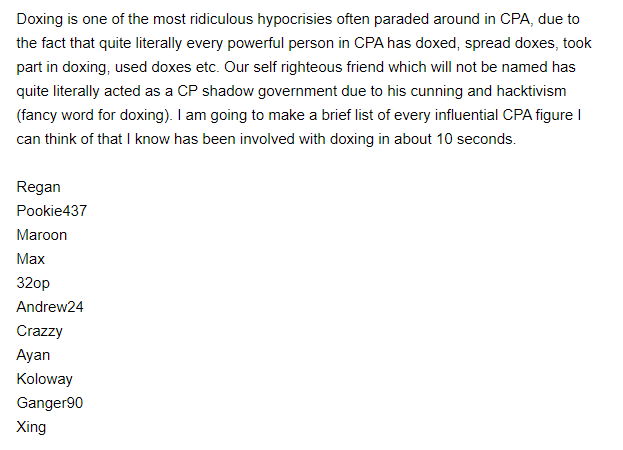 I knew on a personal basis that this list contained names who can indeed be linked to doxxing, but the lack of evidence to support this accusation was troubling to me.

Regarding part 1 itself, it did raise some very valid and very true concerns. Corruption is a significant issue and has been for many years in CPA. It raises the questions of how corruption is moderated and stopped and how the people in power can be held accountable for their actions when they become corrupt. As I’ve said in my own posts, Riley is a prime example of a leading force in CPA through CPOAL whom was also corrupt. How do we stop corrupt people getting into power?

Part 2 again falls victim to the failings of part 1.

So Pookie437, former CPAH CEO, asked you for your RFCP doxes? Where are the screenshots proving this? Where’s the proof? None of the accusations like this can be validated or taken seriously without the proof to back them up. If this were backed up, it would be a substantial revelation, but without any proof behind it it’s hard to take such claims seriously.

As someone who knows both sides of the story where Eden is concerned, I can understand the concerns Anonting raises about Eden. Eden sometimes takes immoral actions as part of a morally driven goal. Eden’s hardly a saint, I will agree.

It does raise the question of how far a person should be allowed to go in the pursuit of truth and justice. How far a person is able to go without becoming, ironically, a hypocrite.

Reading this part did make me laugh a little, because it’s true Pookie got CEO on CPAH and consequently became head of the community thanks to Eden handing it to him. Whatever you think about Pookie, Eden gave him that position and trusted him with that power.

I’ll give you my take.

I think Eden does his best in a community that’s dodgy as is. I think he’s made plenty of mistakes; as someone who was never that fond of Pookie personally, I very much question Eden’s wisdom in that decision but that overall, he tries.

Regarding Eden’s doxxing, whilst I wasn’t personally aware of it I can’t say I’m surprised. Maintaining order and control in a community like this doesn’t happen without getting your hands dirty from time to time.

Is it morally right?

I don’t know. I’ve never condoned or been okay with doxxing, but success is success, and Eden has succeeded up till now in taking down threats, even when he’s been their creator. It depends on what you value most I guess. Order vs anti-corruption vs anti-doxxing.

Where do you stand?

Personally, I’m curious to see where CPAH goes with this. Their founder did just get outed as a doxxer. I wonder where this will end really. Part 3 is billed as the finale to Anonting’s posts, but I imagine this storm is only just beginning…

That about covers everything I had to say on Anonting’s posts.

Next, some brief discussion of responses I got about my article.

I appreciated all the feedback! I’m new to writing for sites like this so it’s good to know I’ve got off on the right foot. I am planning to do a separate post discussing BIA and CPAH, though that may not be for a while.

Coolster mentioned that monopolies do have the power to be a force for good, which is a very valid point. CPAC was in some ways a monopoly back in OG-CPA and at points it was a positive force for sure.

Finally, I turn to CPAPP itself.

Viewers of the CPAPP server will be familiar with this post, but this was released through the CPA wiki last night:

We decided to unpartner with CPAPP last night after some revelations. I won’t reiterate everything it says, but in summary:

I felt personally I was uncomfortable partnering the wiki with an organisation that allows the practise of writers impersonating other members of the community. I was also concerned about the presentation of opinion-based articles as factual, though the former point was what drove the decision to unpartner.

It was unfortunate we had to make this decision, again personally I like CPAPP as a concept as a platform which stands for freedom of speech, but I felt uncomfortable dragging the wiki into that, and the team agreed.

Due to the lack of a better alternative, I am going to keep providing posts for CPAPP. Although it’s practises need to be examined a lot more closely, it remains the only platform available to truly express opinions freely.

That about summarises everything I have to say.

Until the next one,